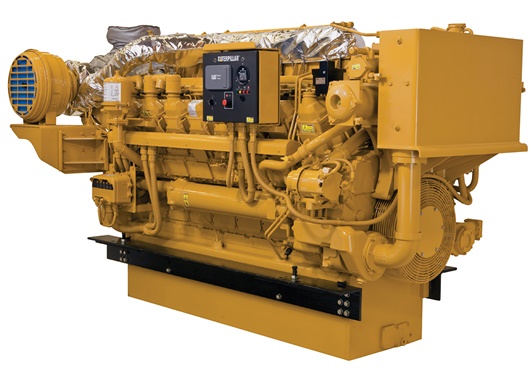 The connections to the external cooling systems can be connected together to form circuits, defined sequences of the components involved. The cooling circuit configurations available for a given engine model will vary, with the most commonly seen described below. Many engines use mutliple cooling circuits. A combined circuit arrangement can be created by operating the jacket water system as a closed loop that is cooled by the aftercooler flow. In isolating the jacket coolant, there is only one external cooling flow. The most commonly seen configuration for turbocharged engines is the separate circuit arrangement, sometimes abbreviated as SCAC for “separate-circuit aftercooled.” The aftercooler is moved to a circuit distinct from that of the jacket water, which allows the two circuits to be regulated to different temperatures.

Running the aftercooler at a much lower temperature than the jacket water allows the intake charge temperatures to be lowered. The greater air density and reduced charge temperature that result both contribute to enabling higher engine power levels. Separate-circuit cooling is a necessity on gas engines. The lower temperature of the air-fuel mixture delivered to the cylinders is essential to avoiding detonation, one of the key limiting parameters for gas engine performance. The separate circuit configuration does require one circulating pump, one thermostat, and one external coolercore for each circuit.

A special case of separate circuit cooling seeks to use the best properties of liquid- and air-cooled systems on the same engine. The engine’s jacket water system is retained as it is found on other separate-circuit configurations but the engine-mounted, liquid-cooled aftercooler is replaced with a direct air-to-air heat exchanger, typically installed off-engine. This is done in instances where high ambient air temperatures are expected to limit the ability to achieve the required temperature of the coolant provided to the engine’s aftercooler. By eliminating the liquid coolant circuit, one intermediate step of the heat exchange is removed. This allows only one step of temperature difference (approach temperature) instead of two, allowing the combustion intake air to be cooled to a temperature much closer to the ambient air temperature than would be possible with the liquid-cooled circuit. The layout of an ATAAC arrangement is shown below. Air enters at the air cleaner (2), is boosted by the turbocharger (4), and then is routed to the air-to-air core of the cooler (5). Temperature measurement at the engine air inlet (3) allows control of the resulting air temperature via a regulated bypass valve (1) on the external air lines.